A bit of the summary of things since my last Blog Post - :-/

To say I have been busy the last few weeks is an understatement at best. However, I don't think that is necessarily a bad thing, unless I don't stop to smell the roses in my life - my family, and they are awesome! My husband has traveled continuously for the last 5 weeks, stopping at home long enough to repack a bag, have meal with us and back out - we've missed him. My kids, they are awesome. There have been a few days I had appointments for various things and gotten home after they did, (They are teenagers so old enough to home for a few hours alone) and on those occasions, I have returned home to find they worked together to straighten up whatever it was I had missed doing that day. Gotta luv it when teenagers clean without being told - that is so awesome.

I've been spending more time with the kids after they get home from school, and after their homework has been completed taking time to laugh, watch a movie, talk about the day, play a game . I am not sure why but the kids were even more humorous than usual. I love laughing with them. Of Course they still throw in the occasional joke about "Ubuntu stole my Mom" or teasing me about "fine then I am installing 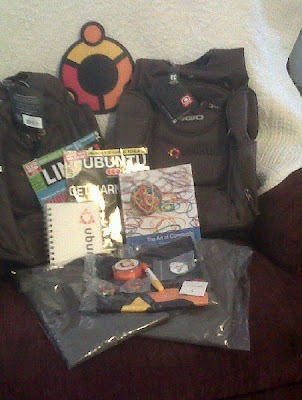