An Ubuntu hour was held in Winston Salem, NC on Saturday. It was a lot of fun as discussions were held between the 6 that ranged from kernel issues to what to I need to do to become and Ubuntu member. Mark, and Dewey were from Winston Salem, Jeremy, Daniel, and I drove about 3 hours to get there, and Adam drove about and hour and a half to get there. We had a great time. Here's some pics of the hour. 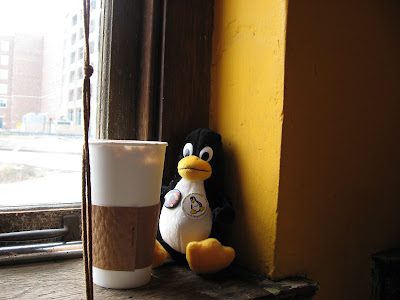 Tux found a quiet spot to enjoy the coffee and listen to everyone gab. But as you will soon see he got in on the meeting as well. 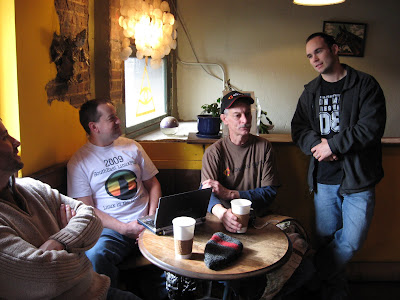 Left to right - the person who is cut off in the pic is Daniel, the Dewey, Mark, and Adam. The conversation looked intense but I am not sure what was really being discussed in this shot. 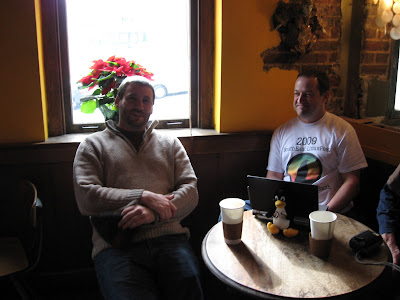 As you can see Tux joined the conversation and before long smiles were everywhere. 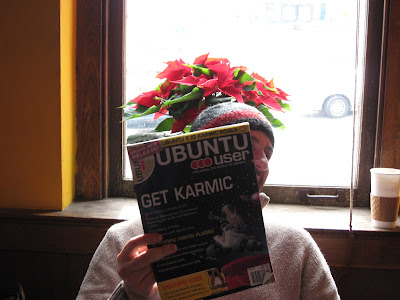 Daniel was showing off the reading material available to the group. 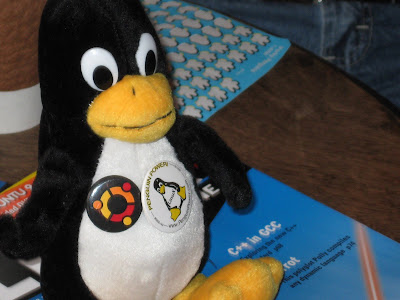 Tux Up close and personal - I pause for a moment because this particular Tux is one that my friend, Laura, from the Ireland LoCo team gave me at UDS. I hope to see Tux travel to some more places during 2010 and tell some stories. (He said the coffee was good but the Ubuntu LoCo members were the real entertainment. 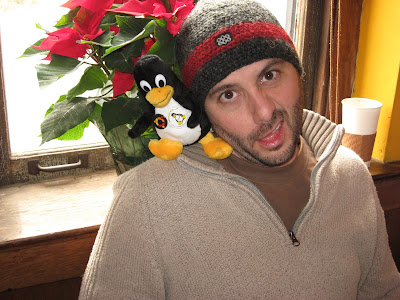 Tux was giving Daniel some kernel advice since Daniel was trying to help Dewey with some kernel issues during the ubuntu hour. See Ubuntu people have either a TUX on their shoulder or a the Ubuntu Logo (Circle of Friends) still haven't figured out which is meant to be the angel or the devel (pun intended). 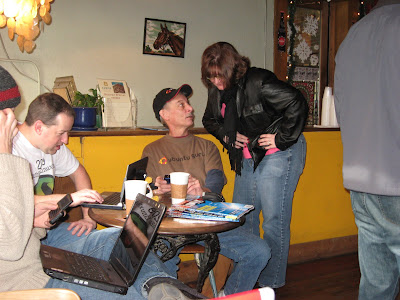 Mark and I talking about who knows what. I think membership or one of the NC LoCo Team projects - who knows it was all fun. 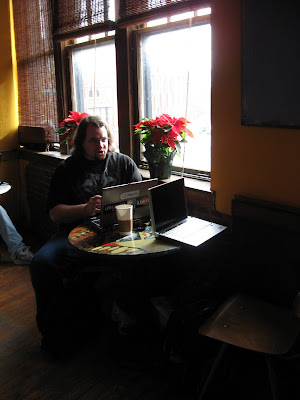 Jeremy in the corner I think hiding from all the people.. No really he was working on kernel bugs but that is a whole other story. 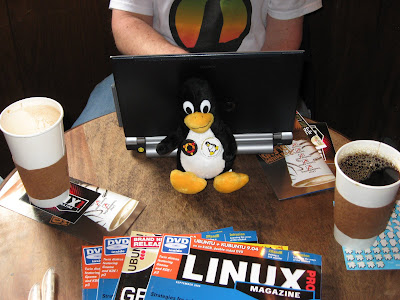 
It was a great morning and well worth our 6 hour round trip drive to be there to support the team. GO NC LOCO TEAM ( I see an Ubuntu Hour closer to my house next time). :-) Thanks MagicFab for the suggestion of Ubuntu Hours - :-)
Posted by Just Me, Amber! at 4:37 PM